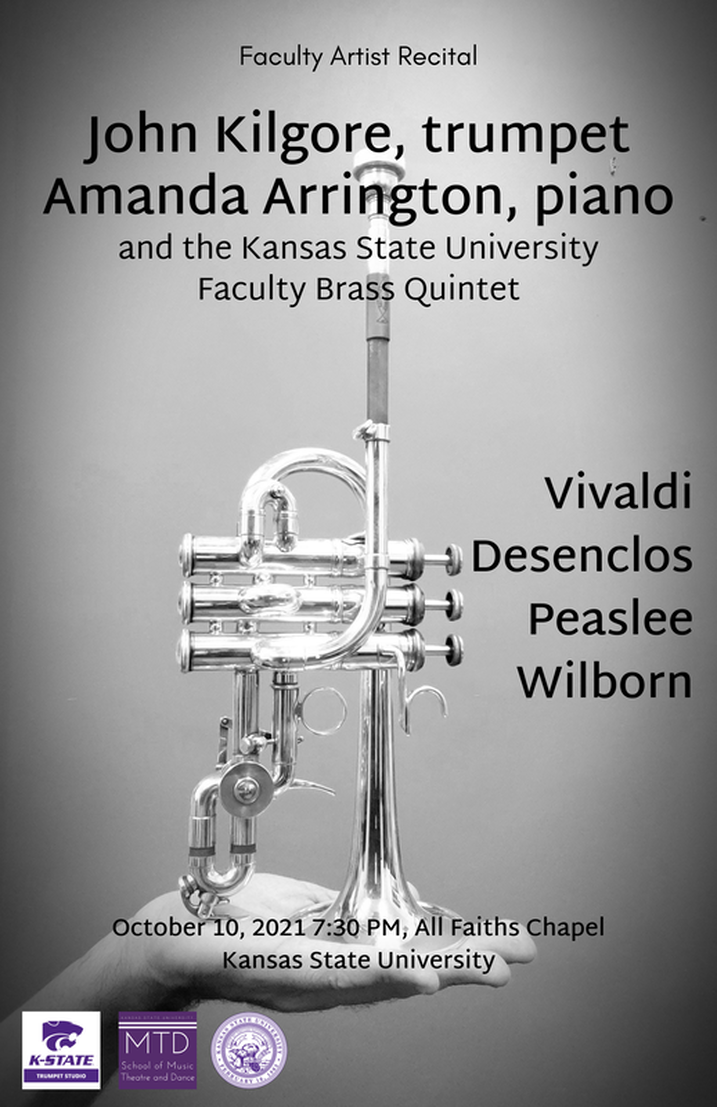 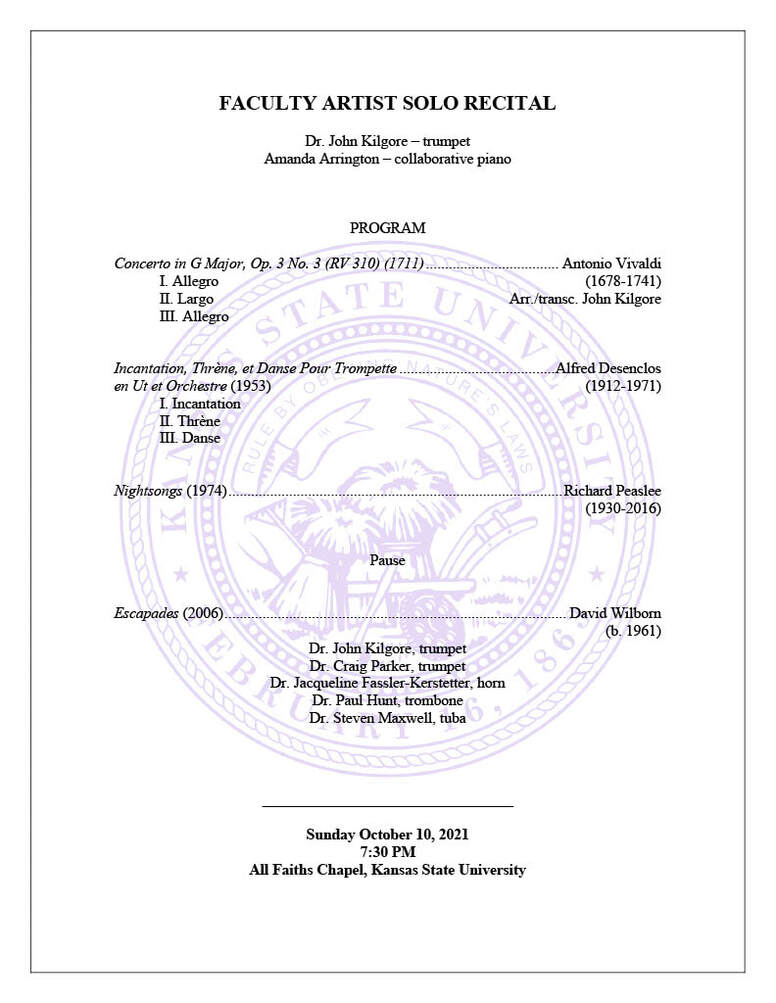 Concerto in G Major, Op. 3 No. 3 (RV 310) (1711) – Antonio Vivaldi (1678 – 1741)
Arr./Transc. John Kilgore
Antonio Vivaldi is one of the most significant musicians from the Italian baroque period. His compositional output, around 800 works, is substantial and includes concertos, sonatas, sinfonias, operas, and sacred music. Concerto in G Major, Op. 3 No. 3 is a work for solo violin and strings, and is part of a collection of 12 concerti: L’estro armónico (The Harmonic Inspiration). Specific to trumpet, Vivaldi’s Concerto for 2 Trumpets (RV 537) is one of the most famous and often performed baroque trumpet concertos.

While the catalogue of solo trumpet repertoire from the baroque is substantial, the works are harmonically and melodically limited. This was a result of the trumpet from this period being a natural instrument (no valves) with access to one harmonic series and key area. In the 1950s-60s, a ‘baroque music revival’ occurred, and soloist Maurice Andre assisted in the creation and performance of several transcriptions for modern piccolo trumpet. An example is Tartini’s Concerto in D, which remains popular to this day. With the modern piccolo trumpet fully chromatic, a baroque work with a deeper harmonic language, such as the Concerto in G Major, Op. 3 No. 3, can be adapted and performed. The version performed tonight is exact to the original composition regarding key and harmonic structure. The solo trumpet part is about 80% the same as the violin solo with idiomatic adaptations for the modern trumpet.

Incantation, Thrène, et Danse Pour Trompette en Ut et Orchestre (1953) – Alfred Desenclos (1912 – 1971)
Alfred Desenclos was a French composer active in the early-mid 20th century. In addition to composing, he taught at the Roubaix Conservatoire, and later at the Conservatoire de Paris until his death in 1971. Although Desenclos composed in several genera, his output is somewhat small in comparison to his contemporaries. His music combines several styles and practices including romanticism, classical, baroque, tonal, chromaticism, and jazz. His works are highly complex, and take influence from composers including Ravel, Messiaen, Wagner, among others.

Incantation, Thrène, et Danse was composed for the annual Paris Conservatoire Concours solo contest. The Concours created a vast expansion of solo trumpet repertoire including 20th century concertos by Tomasi, Jolivet, Chaynes – when compared to previous repertoire, these solos expanded upon traditional artistic and technique demands. The work is a concerto (originally scored for orchestra) with three distinct movements. Incantation is proclamation-like featuring abrupt statements and amorphous-sounding phrases, with both tonal and dissonant textures. Thrène is an introspective lamentation with street busking-like melodies supported by lush harmonies. The finale, Danse, begins with a cadenza containing both original and previous thematic material, and improvisation-like pacing. The primary theme is a waltz in 5/8 and 6/8 that gradually builds in intensity and technique. Moments of striking contrast and lyricism develop toward an exclamatory conclusion.

Nightsongs (1974) – Richard Peaslee (1930 – 2016)
American composer Richard Peaslee studied at Yale University, Juilliard, and with Nadia Boulanger. He composed for major symphony orchestras, jazz orchestras, and films – examples include the Philadelphia Orchestra, Seattle Symphony, The Stan Kenton Orchestra, among others. He also composed for theatres and dance companies such as the Royal Shakespeare Company and the New York City Ballet. Nightsongs is a unique solo because it is written primarily for flugelhorn, a mellow-toned instrument common in jazz, brass band, and chamber music.  The work is melodically driven in a song-like way, possibly connecting to Peaslee’s experience writing for film and theatre in New York. The unique aesthetic of the instrument supports the melancholy melodies, and is contrasted by the occasional sharp restless-sounding sections for trumpet. Peaslee utilized texture to evoke many different colors, sounds and possibly emotions one may experience during a nighttime stroll. The work was commissioned by Harold Lieverman (d. 2020) – a studio musician and former professor at Mannes College and the Manhattan School of Music. Nightsongs was originally composed for orchestra and harp.

Escapades (2006) – David Wilborn (b. 1961)
Trombonist and composer David Wilborn currently serves as associate professor of music at Texas A&M University where he teaches low brass and is the coordinator of small ensembles. He studied trombone with Donald Knaub, John Marcellus, composition with Donald Grantham, and earned degrees from The University of Texas at Austin (BM & DMA) and the Eastman School of Music (MM). As a composer, his solo and chamber works for brass have won several awards including Escapades, a winning composition at the Appalachian State 2004 Brass Chamber Music Festival Composition Contest. The one-movement work is both rhythmically and melodically driven. Notably, Escapades shifts through varying styles including contemporary, jazz, Latin, and improvisatory-like sections. Versions of the work are scored for brass quintet and brass octet. The performance tonight is given by the Kansas State University Faculty Brass Quintet.